Article from Time circa 2009 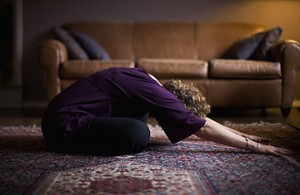 Talk. Share. Cry. Stretch? Psychotherapy has historically been an exercise of the mind, but in the offices of more and more modern-day mental-health providers, emotional healing is taking place not just on the couch but on the yoga mat.

The burgeoning field is called yoga therapy, and its practitioners include psychiatrists, psychologists and social workers who incorporate yoga poses and meditative breathing into their sessions, as well as yoga teachers who want to learn how to address the emotions that bubble up in students during class or in private sessions. The idea, say yoga therapists, is to allow yoga to empower people while priming them to access their deepest emotions.

A typical yoga-therapy session with Dr. Elizabeth Visceglia, a psychiatrist and yoga therapist based in New York City, often starts with some kind of breath work — energizing breaths for people who are depressed, balancing breaths for those with anxiety. Then patients practice yoga poses geared to their specific needs. People with severe posttraumatic stress disorder, for example, are prone to losing their sense of being in the room when they experience a vivid reliving of their trauma. So Visceglia has them hold simple grounding positions, like the warrior or chair pose, before transitioning into talk therapy.

“Emotional memories are stored in your body,” Visceglia says. “A group yoga class, is not structured to enable you to process that. Ideally one would want to work with someone who is paying attention to both the physical and emotional experiences.”

That’s the philosophy behind yoga therapy instruction at Phoenix Rising in West Stockbridge, Mass., where yoga therapists, who do not need to be mental-health practitioners, learn to address both the mind and body in one-on-one sessions and group classes. A Phoenix Rising yoga therapist puts clients in assisted yoga postures and does a kind of “verbal exploration” of the present moment. The yoga therapist acts as a witness to clients’ exploration, with empathy and positive regard for their experience.

The concept of healing the mind via the body, and vice versa, has been around for decades. “Freud used to work with hysterical women with unconscious conflicts that they couldn’t express through words,” says Visceglia. “Only through looking at the symptoms of their body [like phantom pregnancies] could they even get to what was psychologically needed for healing.”

Since the days of Freud, research into the mind-body relationship has come a long way. Studies show that not only are your mental health and mood dependent in large part on physical factors like exercise, but also unchecked stress, anxiety and depression can affect physical health, increasing blood pressure, heart disease and even risk of death. So it was perhaps inevitable that patients would start bringing their yoga mats into therapy.

The practice is quickly gaining popularity. There are now close to 50 schools of yoga offering yoga-therapy training in the U.S. And the International Association of Yoga Therapists has more than tripled its membership from 2003 to 2009, to about 2,500 members. “Now we have more licensed health-care providers, including psychologists, coming in who are interested in using yoga in their work,” says Kelly McGonigal, the editor in chief of the International Journal of Yoga Therapy.

In fact, yoga therapy may even offer some aid to psychiatry’s most intractable patients. Visceglia is in the process of analyzing data from a recent study she conducted at Bronx State Psychiatric Center on the effects of yoga therapy in people with chronic schizophrenia, some of whom have been hospitalized for 15 to 20 years. Her study suggests a decrease in negative symptoms and an increase in quality of life. The endocrine system and parasympathetic nervous system are out of whack in schizophrenia patients; yoga affects these systems, Visceglia says, leading to an increased overall feeling of calm.

That sense of peace is what Joan Stenzler, a licensed clinical social worker and a yoga teacher in Fresh Meadows, N.Y., tries to create in her sessions. In addition to using physical yoga poses, Stenzler teaches her clients about the five koshas, or layers of consciousness, in yoga: physical, energetic, mental-emotional, wisdom and bliss. “Each kosha represents one aspect of our existence or consciousness and can potentially be open and accessible to the individual, or blocked,” says Stenzler, who helps patients identify and free themselves from their areas of blockage.

“When I first came [to therapy] I was having a lot of anxiety and physical symptoms that made me feel trapped,” says Rachel W., a special-education teacher. “Through yoga, Joan helped me witness what I was experiencing and train myself to think past my body.”

But some experts are cautious about the combo therapy. Their main concern is safety: Are psychotherapists really equipped to teach yoga? “Yes, but only with extensive yoga training,” says Bo Forbes, a clinical psychologist, yoga teacher, and founder and director of the Center for Integrative Yoga Therapeutics in Boston. She believes that psychotherapists should have in-depth study of yoga and a strong background in anatomy and alignment to limit client injuries. Currently, there are no official licenses or standards of practice for yoga therapy.

Further, says Forbes, many mental-health experts who try yoga therapy may have a difficult time overcoming the mores of their profession. “As psychologists, we have been schooled against touch. For example, it can take work for the clinicians who go through our teacher-training programs to overcome that prohibition.”

Already, however, many therapists are guiding downward-dog poses in the office. Stenzler says yoga and psychotherapy make a perfect union — which is what yoga actually translates to in Sanskrit. “The goal and intention in psychotherapy is to support a patient to be who they always were. And that’s yoga! I’ve been doing it all along and didn’t realize…”

I refuse to become a ‘Dead Man Walking’

Sometimes the reflection I see in the mirror as I shave before work is alien to me and when the man I see, is a pale reflection of the man I want to be, it is time for change.

I have always been a Seeker, a restless spirit, someone who enjoys searching, learning and growing. Whenever my life grows stale and cold due to the entropy of awareness, I seek out a transformative process that will bring me to the precipice of myself and be a rigorous catalyst for change.

The thing is, I too enjoy comfort, stability, structure, (not to mention good red wine and rich comforting foods), but I am also aware of how the creative, intellectual, and spiritual parts of my life are prone to atrophy over a period of time if new wellsprings are not actively sought out. I don’t think it is possible to have a ‘safe’ life, to cling to comfort like a small child and to evolve at the same time. So, in order to rekindle the light behind my eyes, I am embarking on another transformative process.

I did various martial arts for over a decade, I enjoyed the cardiovascular aspects, the discipline, the strength I could feel in my body and the moment by moment awareness necessary when sparring with an opponent. But, with time my opponents grew younger (or I older) and my relationship with Kung-Fu ended with three cracked ribs and a month of painful insomnia.

I am a kinetic being and if I do not exercise, my mind becomes cloudy and filled with dangerous crackling static. My partner’s suggestion that I start Yoga was met with derision, I heaped scorn upon something I knew very little about and it was only when my ferocious mind threateningly tightened its noose that I capitulated and found myself on a yoga mat, surrounded by women, feeling quite emasculated and self conscious. Slowly, very slowly I lowered my defenses, my martial power based practice, my expectations, I massaged my ego when I fell out of poses, I began to find my balance and concentrate on what was happening on my mat as opposed to the attractive woman two rows down.

Over the past five years it has become less important as to whether or not I can do a handstand, but whether I can be present throughout a strong flowing practice. Can I drop beneath the ceaseless fluctuations of the mind, the preening ego, into the quiet depths below? It is in these depths that I have begun to understand the potency of this practice and its very clear links  to my healing vocation.

I know it may all sound a wee bit evangelical… but bare with me while I explore and plot the topography of these depths over the next five month teacher training cycle, there is something in here which we can all use to understand ourselves. It may take courage for a Spirit to grow, but I’ve got a feeling its going to take bloody hard work too!