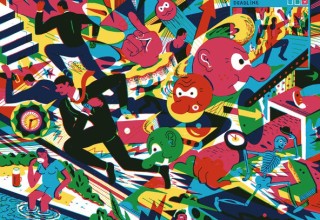 Apologies to those of you who check in with shrinkrap regularly.
I am writing, but a lot of it feels too personal to share, so I need to sit with it all a while longer. As a rule, I don’t generally like using other people’s content, but it feels important to keep posting lest I let shrinkrap starve.
Back soon.

You’ve probably had to listen to a lot of people tell you how busy they are. It’s become the default response when you ask anyone how they’re doing: “Busy!” “So busy.” “Crazy busy.” It is, pretty obviously, a boast disguised as a complaint. And the stock response is a kind of congratulation: “That’s a good problem to have,” or “Better than the opposite.”
It’s not as if any of us wants to live like this; it’s something we collectively force one another to do.
Notice it isn’t generally people pulling back-to-back shifts in the I.C.U. or commuting by bus to three minimum-wage jobs who tell you how busy they are; what those people are is not busy but tired. Exhausted. Dead on their feet. It’s almost always people whose lamented busyness is purely self-imposed: work and obligations they’ve taken on voluntarily, classes and activities they’ve “encouraged” their kids to participate in. They’re busy because of their own ambition or drive or anxiety, because they’re addicted to busyness and dread what they might have to face in its absence.

Almost everyone I know is busy. They feel anxious and guilty when they aren’t either working or doing something to promote their work. They schedule in time with friends the way students with six distinctions make sure to sign up for community service because it looks good on their college applications. I recently wrote a friend to ask if he wanted to do something this week, and he answered that he didn’t have a lot of time but if something was going on to let him know and maybe he could ditch work for a few hours. I wanted to clarify that my question had not been a preliminary heads-up to some future invitation; this was the invitation. But his busyness was like some vast churning noise through which he was shouting out at me, and I gave up trying to shout back over it.

Even children are busy now, scheduled down to the half-hour with classes and extracurricular activities. They come home at the end of the day as tired as grown-ups. I was a member of the latchkey generation and had three hours of totally unstructured, largely unsupervised time every afternoon, time I used to do everything from surfing the World Book Encyclopedia to making animated films to getting together with friends in the woods to chuck dirt clods directly into one another’s eyes, all of which provided me with important skills and insights that remain valuable to this day. Those free hours became the model for how I wanted to live the rest of my life.

The present hysteria is not a necessary or inevitable condition of life; it’s something we’ve chosen, if only by our acquiescence to it. Not long ago I Skyped with a friend who was driven out of the city by high rent and now has an artist’s residency in a small town in the south of France. She described herself as happy and relaxed for the first time in years. She still gets her work done, but it doesn’t consume her entire day and brain. She says it feels like college — she has a big circle of friends who all go out to the cafe together every night. She has a boyfriend again. (She once ruefully summarized dating in a city “Everyone’s too busy and everyone thinks they can do better.”) What she had mistakenly assumed was her personality — driven, cranky, anxious and sad — turned out to be a deformative effect of her environment. It’s not as if any of us wants to live like this, any more than any one person wants to be part of a traffic jam or stadium trampling or the hierarchy of cruelty in high school — it’s something we collectively force one another to do.

Our frantic days are really just a hedge against emptiness.
Busyness serves as a kind of existential reassurance, a hedge against emptiness; obviously your life cannot possibly be silly or trivial or meaningless if you are so busy, completely booked, in demand every hour of the day. I once knew a woman who interned at a magazine where she wasn’t allowed to take lunch hours out, lest she be urgently needed for some reason. This was an entertainment magazine whose raison d’être was obviated when “menu” buttons appeared on remotes, so it’s hard to see this pretense of indispensability as anything other than a form of institutional self-delusion. More and more people in this country no longer make or do anything tangible; if your job wasn’t performed by a cat or a boa constrictor in a Richard Scarry book I’m not sure I believe it’s necessary. I can’t help but wonder whether all this histrionic exhaustion isn’t a way of covering up the fact that most of what we do doesn’t matter.

I am not busy. I am the laziest ambitious person I know. Like most writers, I feel like a reprobate who does not deserve to live on any day that I do not write, but I also feel that four or five hours is enough to earn my stay on the planet for one more day. On the best ordinary days of my life, I write in the morning, go for a long bike ride and run errands in the afternoon, and in the evening I see friends, read or watch a movie. This, it seems to me, is a sane and pleasant pace for a day. And if you call me up and ask whether I won’t maybe blow off work and check out a new movie, or ogle girls or just drink chilled pink minty cocktails all day long, I will say, what time?

But just in the last few months, I’ve insidiously started, because of professional obligations, to become busy. For the first time I was able to tell people, with a straight face, that I was “too busy” to do this or that thing they wanted me to do. I could see why people enjoy this complaint; it makes you feel important, sought-after and put-upon. Except that I hate actually being busy. Every morning my in-box was full of e-mails asking me to do things I did not want to do or presenting me with problems that I now had to solve. It got more and more intolerable until finally I fled town to the Undisclosed Location from which I’m writing this.

Here I am largely unmolested by obligations. There is no TV. To check e-mail I have to drive to the library. I go a week at a time without seeing anyone I know. I’ve remembered about buttercups, stink bugs and the stars. I read. And I’m finally getting some real writing done for the first time in months. It’s hard to find anything to say about life without immersing yourself in the world, but it’s also just about impossible to figure out what it might be, or how best to say it, without getting the hell out of it again.

Idleness is not just a vacation, an indulgence or a vice; it is as indispensable to the brain as vitamin D is to the body, and deprived of it we suffer a mental affliction as disfiguring as rickets. The space and quiet that idleness provides is a necessary condition for standing back from life and seeing it whole, for making unexpected connections and waiting for the wild summer lightning strikes of inspiration — it is, paradoxically, necessary to getting any work done. “Idle dreaming is often of the essence of what we do,” wrote Thomas Pynchon in his essay on sloth. Archimedes’ “Eureka” in the bath, Newton’s apple, Jekyll & Hyde and the benzene ring: history is full of stories of inspirations that come in idle moments and dreams. It almost makes you wonder whether loafers, goldbricks and no-accounts aren’t responsible for more of the world’s great ideas, inventions and masterpieces than the hardworking.

“The goal of the future is full unemployment, so we can play. That’s why we have to destroy the present politico-economic system.” This may sound like the pronouncement of some bong-smoking anarchist, but it was actually Arthur C. Clarke, who found time between scuba diving and pinball games to write “Childhood’s End” and think up communications satellites. My old colleague Ted Rall recently wrote a column proposing that we divorce income from work and give each citizen a guaranteed paycheck, which sounds like the kind of lunatic notion that’ll be considered a basic human right in about a century, like abolition, universal suffrage and eight-hour workdays. The Puritans turned work into a virtue, evidently forgetting that God invented it as a punishment.

Perhaps the world would soon slide to ruin if everyone behaved as I do. But I would suggest that an ideal human life lies somewhere between my own defiant indolence and the rest of the world’s endless frenetic hustle. My role is just to be a bad influence, the kid standing outside the classroom window making faces at you at your desk, urging you to just this once make some excuse and get out of there, come outside and play. My own resolute idleness has mostly been a luxury rather than a virtue, but I did make a conscious decision, a long time ago, to choose time over money, since I’ve always understood that the best investment of my limited time on earth was to spend it with people I love. I suppose it’s possible I’ll lie on my deathbed regretting that I didn’t work harder and say everything I had to say, but I think what I’ll really wish is that I could have one more beer with Chris, another long talk with Megan, one last good hard laugh with Boyd. Life is too short to be busy.